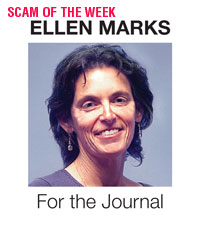 New Mexico generally follows nationwide trends when it comes to destructive ransomware attacks, but there is one area where the state stands out: hacking efforts by foreign governments and “nation-state actors” that work on behalf of an outside government, says Juan Carlos Guerra, FBI supervisory special agent in Albuquerque.

That’s because of the number of national laboratories, military institutions and contractors and high-tech industries that call New Mexico home, he says.

Local FBI officials wouldn’t provide exact numbers or examples of such attacks, but Guerra says non-domestic bad actors generally “try to get a technical advantage over us, and cyber (attacks) are one way to do that.” So if an entity is developing a product or technology that’s not on the market yet, “that is something they would target,” he says.

The message the FBI is trying to spread in conjunction with October’s Cybersecurity Awareness Month is that now is the time for businesses and individuals to protect against ransomware and cyber attacks of all kinds – not after the criminals have struck.

“This is not something that theoretically can happen,” Guerra says. “It’s happening.”

Ransomware occurs when malicious software, or malware, is downloaded onto a computer, locking files and networks until a victim agrees to pay a ransom. Sometimes even then, data that might contain sensitive information is destroyed.

It has happened to government agencies, businesses, medical providers, individuals and others throughout New Mexico and is proliferating partly because hackers are selling the codes that can be used to invade computer systems, Guerra says.

Top threats across the country, including in New Mexico, are ransomware and business email compromise scams, in which an employee is tricked into transferring money to the scammer.

Some protective steps include keeping software and operating systems up to date; making sure anti-virus programs are set to automatically update and run routine scans; backing up data regularly and making sure the backups are not connected to the computers from which they are saving the information.

The local FBI is also encouraging businesses that are interested or concerned about cybersecurity to get the agency involved. A local agent will respond and help put together a protective plan. Send an email to the FBI at AQ-FBI-Media@fbi.gov, or call (505) 889-1300.

To report a crime, go to the Internet Crime Complaint Center at IC3.gov.

There’s a new way to get help when it comes to identity theft.

Advisers from the center will question callers about what happened and provide a “detailed, custom plan of action steps to take,” according to a news release. They also will give advice about how to stay safe and avoid becoming a victim. Go to nmag.gov/protect-yourself/identity-theft/. A chat box will pop up at the right-hand bottom of the screen.

Contact Ellen Marks at emarks@abqjournal.com or (505) 823-3972 if you are aware of what sounds like a scam. To report a scam to law enforcement, contact the New Mexico Consumer Protection Division toll-free at 1 (844) 255-9210, prompt 5. Complaints can be filed electronically at nmag.gov/file-a-complaint.aspx.